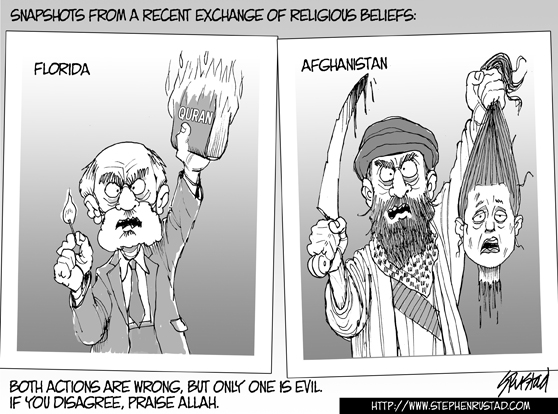 Moral Relativism has been all the rage in intellectual salons and liberal parlors since Communists re-branded themselves as “progressives” way back in the ’50’s. A famous example of Moral Relativism was Susan Sontag’s blaming America for the World Trade Center attacks. In the minds of moral-relativists, there is no good or bad – only choices, the morality of which is up to the individual. So, when an idiot preacher in Florida burns a copy of Quran and a mob in Afghanistan, in reply, slaughters and beheads un-armed UN workers including women, moral relativists tut, “Well, what can you expect.” Moral Relativism is one of those ideas of which George Orwell said. …”is so stupid that only an intellectual could believe it.”