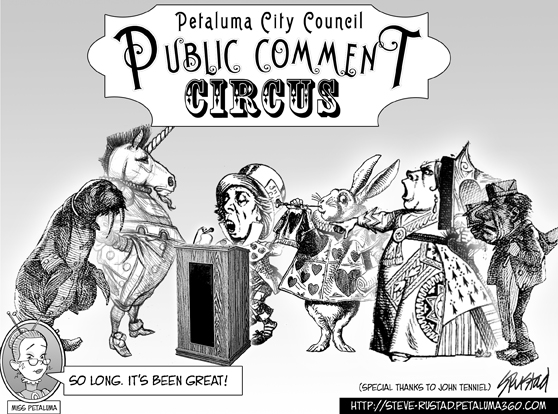 Thursday’s drawing will be my last regular cartoon for the Argus-Courier. Eight years, and some 400 cartoons later, I’m ready to step aside, hopefully to make room for some new talent.

Since 2004, when John Burns asked me to contribute to the paper, I’ve been delighted to make a small contribution to the weekly discussion of issues, both large and small, that affect our town. I’ve greatly enjoyed working with John and Chris Samson prior to his departure from the paper. I always looked forward to the weekly call when we’d hash out the next week’s concept.

The Argus wasn’t the first paper I’d drawn for. Like many cartoonists, I started in high school, in my case drawing for the Cleveland HS Cavalier. As a soldier, stationed in Neubrucke am Nahe, Germany, I drew for the post paper. At UCLA, I contributed to the Daily Bruin. And, while living in Kansas, I drew for the Lawrence Journal World.

However, drawing for the Argus was different from my previous stints as a cartoonist, and in many ways, very special. For starters, Petaluma is rich with “material.” So rich, in fact, that John and Chris, were often at pains to keep me focused on producing constructive messages in lieu of more inflammatory concepts. Often, people who congratulated me that week’s drawing didn’t know that – for the most part – the ideas they attributed to me came from John and Chris and my role was to put these ideas into cartoon form.

John and Chris usually gave me five days to deliver a drawing. As I struggled over the years to make my weekly effort as good as I could, I came to appreciate the skill, talent and sweat of cartoonists who had to produce a daily drawing

Weekly cartoons, by definition, can’t be as timely as the daily work of most editorial cartoonists, so my cartoons had to highlight well-known and, in most cases, more general concerns or events. Thanks to the weekly effort to create a relevant message, I became steeped in Petaluma’s traditions, personalities and passions. Petaluma became that much more important to me as I developed an interest, and some cases real concerns, about topics that had eluded in the ten years I’d lived in Petaluma prior to doing the cartoons.

The weekly gig with the Argus qualified me to join the American Association of Editorial Cartoonists. As a member, I had a ringside seat to the decline in Editorial Cartooning. Sadly, I watched as the importance of editorial cartoons dwindled, and consequently as the ranks of newspaper staff cartoonists dramatically shrunk. Eight years ago, I entertained fleeting fantasies that the Argus might be a launching pad for larger career in cartooning, but as newspaper after newspaper pensioned off their award-winning cartoonists, I came to appreciate John’s determination to keep a cartoon on the Op-Ed page.

Drawing about local issues brought me to the attention of people who I might never had otherwise met. While many appreciated my efforts, others didn’t and would often express their displeasure with colorful word-choices and intriguing assumptions. Contrary to what many of these folks thought, I’ve never considered myself a conservative ideologue or a “tea-bagger.” I’m equally frustrated by the right as I am with the left. While young people continue to run for office to make a difference, many of those elected stay in office out of self-importance and – on the State or National level – the wholly undeserved paycheck.

Fun fact: my connection with the Argus didn’t begin with John’s invitation in 2004. In 1964, while slogging through Basic Training at Fort Ord, I met Dennis Pooler who, some old-timers might remember, worked for the paper in the 1960’s.

After eight years I’m still profoundly grateful to John and Chris for allowing me to be the Argus-Courier’s staff cartoonist and to have cartooned Petaluma four hundred times…more or less.