Two of Obama-the-Magnificent's favorite phrases that must certainly be getting old to everybody but the Progressive Kool Aid drinkers are, "Al Qaeda is dead" and "We don't have a spending problem." As they say, history will be the judge. I fear the damage that OTM's self-talk will cause while we're [...]

Personally, I wouldn't miss some of the pork, I mean "vital" programs, that could be pitched over the looming "fiscal cliff" into well-deserved oblivion. One of my favorite candidates is the zombie (e.g., ever-recurring despite guarantees that it will end when the technology reaches maturity) subsidy for wind power. The [...]

Hey, It’s All the Rage In Venezuela.

Given all the raucous crowing about "mandate" and blatantly smug grins from the left side of the aisle, as Obama-the-Magnificent puts the smack down on the Republicans, I wonder if folks have given any serious thought to the inevitable consequences of a one-party government. Wait, did I use the word [...] 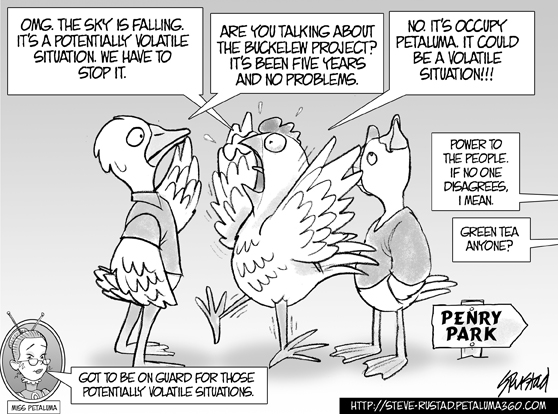 The union of chronic protesters (Local #94952) - AKA Occupy Wall Street / Petaluma franchise - were assembled last Saturday at Penry Park. The Argus stated that there were 150 in attendance. From what I saw, that would have meant counting everyone at least twice. The most charming sight was a about 6 people marching in a tight circle carrying protest signs - a sight that was clearly visible to nobody but the six. 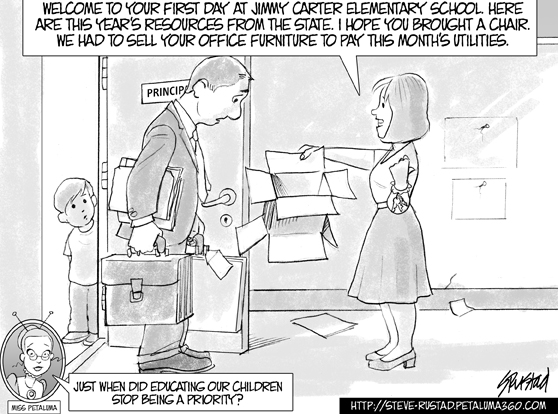 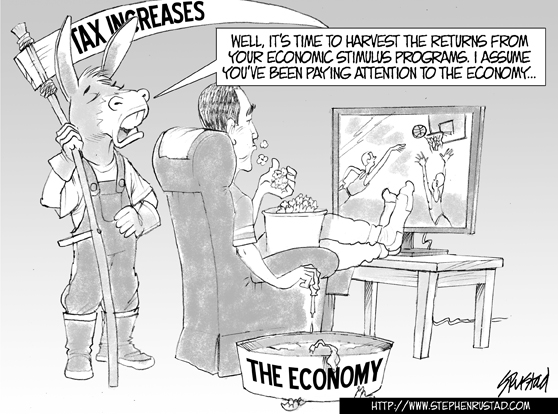 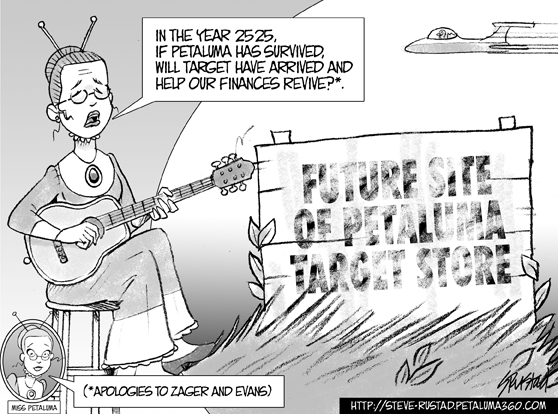 You know, folks who are born in a town and lived there all their lives, or others who move to place because they appreciate it's qualities have a right to feel strongly about the future of their town and express these feelings strongly. No problem there. Of course, that group I just mentioned includes pretty much everyone in Petaluma, not just the "no-growth-ers" Oh, excuse me, the politically correct term for "build-nothing-that-we-don't-like-or-we'll-sue" is Smart Growth. The problem with the Smart/No Growth gang, is that they've forgotten their biology. In EVERY living organism, growth and change MUST happen. When an entity ceases to grow and adapt it starts to die. I don't want my town to die and I don't want to live in a town that's radically changed from the town I love. However, I'm willing to listen with an open mind, accept new ideas that can benefit others (not just me), abide by the rules I voted to approve, and not to sue when things don't go my way. That's what make me - and a lot of others in town - different from the so-called Progressive / Smart Growth gang. 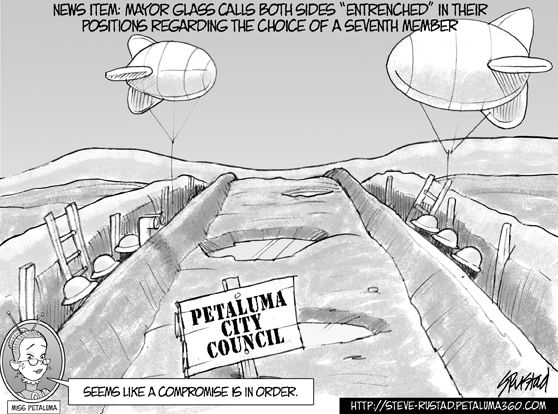 It's a deadlock, alright. Miss P. calls for a compromise, but the business-averse Progressives are so convinced that they're in the right, they've become deaf (excuse, hearing challenged) to any disagreement. And why shouldn't they believe this? Liberal pundits have been writing since the mid-60's that any point of view other than theirs is ignorant, illegal or insane. Whatever else they may believe, the the "so-called" pro-development bloc understands that new construction can be taxed, as can completed buildings, sales, employment and other forms of commerce...and that commerce (not just taxes) are the life blood of communities. 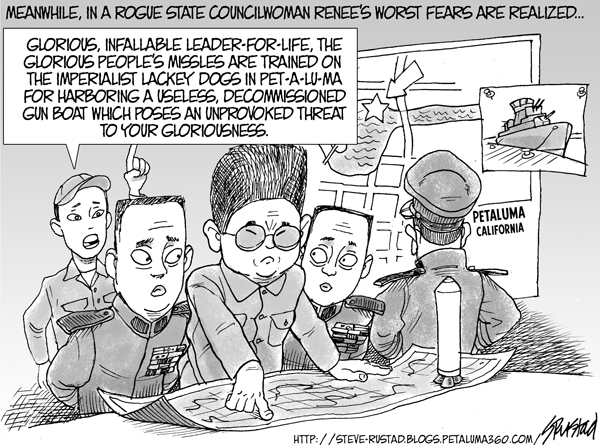 Councilwoman Renée referred to her comments about the international threat to Petaluma posed by a decommissioned WW2 gunboat as "pithy," and averred that they were made in reaction to a request she deemed irresponsible in light of the City's financial distress. Well, okay. Since the definition of "pithy" is: brief, forceful, and meaningful in expression; full of vigor, substance, or meaning, I guess we can surmise from her comment that Ms Renée is substantially, vigorously and meaningfully ignorant of both international relations and economic opportunities. At present, North Korea is a direct military threat to only South Korea. And since the gunboat is currently financially self-sustaining at it's Mare Island berth, one can only assume that it would pose little drain on River City's treasury and might even bring in some needed tourist dollars.